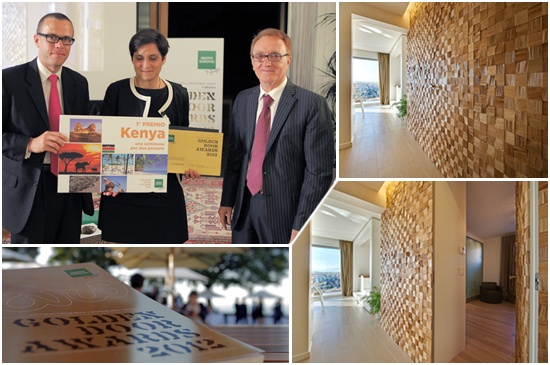 The second edition of the Garofoli Golden Door Awards was held against the splendid backdrop of the Emilia Hotel in Portonovo, surrounded by the natural beauty of the Conero Regional Park. Since 2010 the Group has given this prestigious photography award to the reseller who has best captured the essence and harmony of the Garofoli products in a photograph.  It is an occasion for reaffirming the importance of connections and the network; an opportunity to live and share the values of the company.
The participants, from Italy and other countries, with a total of about 2000 photographs to be submitted to the jury, skillfully used light to lend the Garofoli settings even more style and personality, resulting in beautiful photographs which were all carefully evaluated by a jury of experts in communications and image processing.
Enzo Eusebi, renowned architect and founder of Nothing Studio, crowned the evening by illustrating in detail his project for the new, soon to be constructed, Garofoli Group Headquarters.

Fernando Garofoli presided over the awards ceremony with the Garofoli family in attendance. The award went  to Portes Design, the owners of which won first prize for the ability to capture the innovative character of the Garofoli settings in the luminous simplicity of a slice of contemporary life. In addition to the prestigious award, inspired by the famous Garofoli heart, Portes Design also won a trip to Kenya, one of the most enchanting countries in the world.

Leave your email and receive advice from our interior design experts.